The current weather pattern has wind blowing from the south-east into the UK which has put Saharan dust into the air in the UK.  This wind pattern is not normal, and as well as prompting an April fool’s report of moon dust raining on the UK there are also more serious concerns over air quality.

The dust has been drawn north from the Sahara into the UK by a low pressure system centred off the north-west coast of Spain. 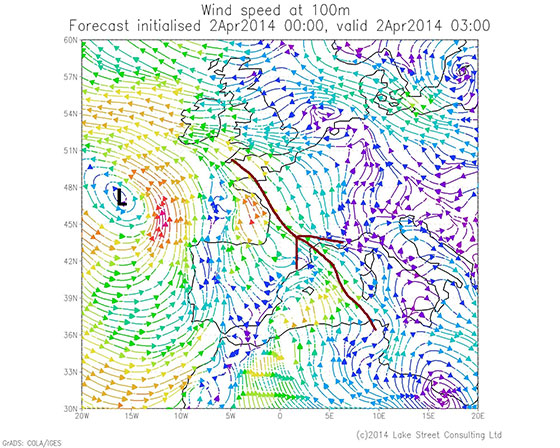 Figure 2:
100m wind direction forecast at midnight for 3am GMT on Wednesday April 2, 2014, with a streamline on which dust can travel drawn in dark red. The centre of the low pressure system is indicated L.

Due to changing wind directions in the last couple days, the dust concentration in figure 1 does not exactly match the wind streamlines in figure 2.  However, transport of the dust by the wind is evident, in particular into the centre of the low pressure system off the north-west coast of Spain.

Air quality concerns are compounded by pollution over central Europe being blown on easterly winds into the UK.  The good news is the wind direction is forecast to shift westerly by Friday.