A surge in flood events

Flooding caused an estimated damage of €4.5 billion to the European Economy over the last ten years and flood damage is expected to rise to €23 billion by 2050 due to an increase in extreme events, population growth and urbanisation (Guardian article).

Extreme univariate (one variable) flood events are popular in scientific research and are largely responsible for the widespread flooding of last winter, with heavy rainfall being the fundamental driver.

However, a new category of extreme events has been defined as Compound Extreme Events. A compound event results from an accumulation of moderate weather events, which when combined, lead to extreme impacts. A flood resulting from the interaction of storm surges and heavy rainfall is an example of a compound extreme event.

The likelihood of a compound flood event occurring is particularly common as flood variables i.e. rainfall and storm surges are induced by similar meteorological drivers. For example Svensson and Jones (2002) stated that mid-latitude cyclones (‘storms’) are the main cause of heavy precipitation and storm surges in the UK, commonly occurring during positive stages of the North Atlantic Oscillation (NAO). An increase in the atmospheric pressure gradient between Iceland and the Azores (NAO positive) drives more storm tracks towards northern Europe (Maraun et al., 2009). Storms are a common occurrence in North West Europe (See our Feb 2016 ‘S is for Storm’ blog). Climatological frequency of weather patterns put some areas more at risk e.g. North Sea.

The North Sea is particularly susceptible to storm surges. Eastward tracking mid-latitude cyclones track from the deep North Atlantic Ocean to the shallow continental shelf of the North Sea, whereby water is funnelled to the low-lying coastal margins.

What is a storm surge?

During a storm event a rise in sea level can occur, known as a storm surge. A storm surge is measured as the difference between the observed height of the water and the predicted astronomical tide. A surge is caused by strong winds and differences in atmospheric pressure. The main component of a surge is wind, particularly on shallow continental shelves like the North Sea (see above). A smaller contribution to the surge comes from differences in atmospheric pressure at the sea surface, known as the ‘inverse barometer effect’, whereby a decrease in pressure of 1 millibar will consequently generate an increase in sea level of 1 centimetre (Pugh, 1987).

A storm surge at high tide, particularly at a Spring tide, would result in considerably more damage than if a surge was to occur at low tide. In areas with large tidal ranges like the UK, timing is crucial with a few hours making a huge difference.

The compound potential of any given location for a flood event, depends on storm surge, tides and freshwater input.
Combined events are difficult to quantify due to their localised occurrence, however, the Intergovernmental Panel on Climate Change (IPCC) state that such an extreme event results from the combination of two or more events and can be defined (similarly to univariate extremes) from either a statistical perspective or in terms of exceeding an impact specific threshold (IPCC, 2012).
A study in 2013 identified statistical dependence between storm surges and extreme rainfall, finding that dependency existed between the two variables up to hundreds of kilometres between the observation stations of tide and precipitation (Zheng et al., 2013).
Despite the recent definition, the impact of compound events are a known threat and with 40% of the European population living in coastal areas, precautions have been made to protect large areas of the coastline (Collet and Englebert, 2013). The Thames Barrier in London, is a movable flood defence barrier and is operated by the Environment Agency to close when a storm surge is forecast. An eight of the Netherlands lies below sea level and the Delta Works in the southwest of the country is an example of one defence system to protect the area from flooding from the North Sea.
However, smaller areas along low lying coastlines remain unprotected and are vulnerable to flood events.

When ascertaining which areas are at risk, global climate models may overlook a compound event. Analysis at a local level is therefore required. One recent surge event in the UK is presented below.
A storm surge in the North Sea occurred on the 13th January 2017, impacting the east coast of the UK. January 13th classifies as a storm surge because of the increase in sea level above that predicted by astronomical tide and with it forecast to coincide with high tides flood warnings were raised for potentially severe impacts along the east coast.
In Whitby, Yorkshire the high water level was 6.5 metres (tide + surge), with individual wave peak maxima recorded above that. Media reports (ITV article, Whitby Storm Surge, Whitby Gazette) show that some flooding occurred along the coast, though it was not as widespread as feared. Whitby is a small town on the North Sea coast of Yorkshire in northern England and is split by the River Esk. Whitby has been affecting by flash flooding from heavy rainfall in recent years (Telegraph, 2016 and Whitby Gazette), so is potentially vulnerable to compound extreme events. 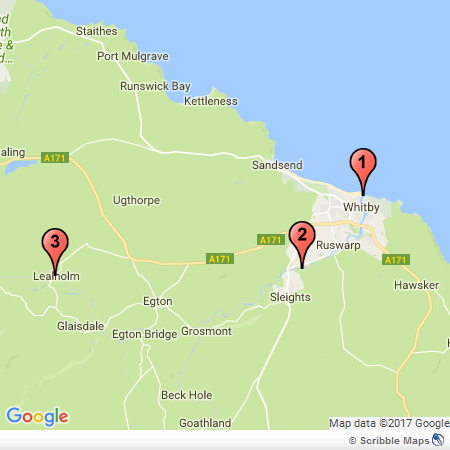 Despite its close proximity to the coast it is clear that location 2 is a river station, rather than a tidal station, because there is a strong dependency between the River Esk at Lealholm and Briggswath (Figure 3). 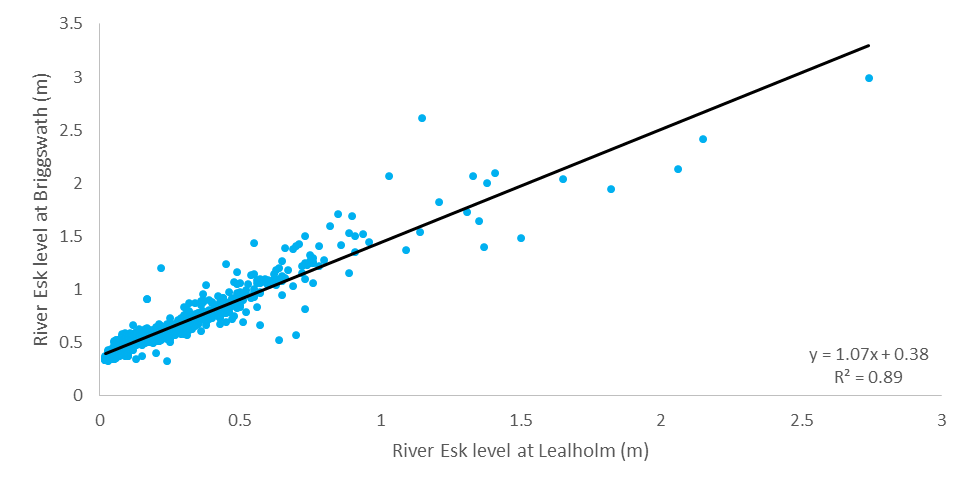 To identify whether Briggswath has a tidal component, hourly observation data is compared for the beginning of January 2017.

Figure 4 shows that river levels were high on the 1st and 2nd of January and again on the 11th to 14th of January, the latter corresponds with high sea levels. The correlation co-efficient for data in Figure 4 is 0.005, showing very little relationship, as expected.

The storm residual in Figure 7 shows a slightly stronger correlation, with an R-squared value of 0.41.
It seems fair to conclude that Briggswath shows some dependency to high sea level events in the North Sea, and the area of Whitby on the North Yorkshire coast has a compound potential and is subsequently vulnerable to extreme impact events.

This event-based analysis highlights the vulnerability of an area to the compounding of meteorological variables and also demonstrates that it is important to evaluate these events at an appropriate, localised, spatial and temporal scale in order for appropriate measures to be taken for flood risk management.